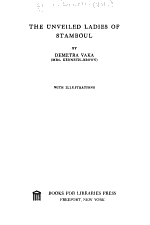 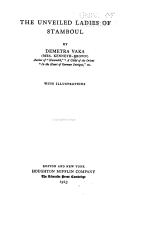 The Unveiled Ladies of Stamboul ... With Illustrations

The Unveiled Ladies of Istanbul (Stamboul)

Authors: Demetra Vaka
Categories: History
The Unveiled Ladies of Stamboul (Istanbul) is a picturesque description of women's life in post World War I Turkey during a period of social and political turmoil. She reports on Mustafa Kemal's successful project of female emancipation as part of the nationalist agenda. 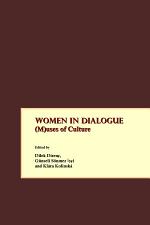 Authors: Dilek Direnç, Günseli Sönmez İşçi
Categories: Social Science
Women in Dialogue: (M)Uses of Culture results from an international symposium held at Ege University, Izmir, Turkey, in 2006, which brought together scholars from over ten countries, and from multiple academic backgrounds, who share professional interest in women’s studies, and, to no less degree, in current women’s realities. The book presents a collection of essays united by a common focus on the position of women as objects of cultural production in different geographic, national, and political contexts, as well as the character and typology of women’s contribution to cultural activity across the ethnic or religious divide marking the face of contemporary world. The volume comprises two sections: the first, titled “Women in Dialogue,” contains contributions which analyze literary representations of women from a variety of perspectives, and from diverse spatial and temporal locations. The second part, titled “(M)Uses of Culture,” includes personalized observations by several women writers, of both poetry and fiction, their commentaries on their own work as artists, and their deeply experienced “musings” on the position of women as artists in the world of today. The essays that this volume brings together are varied in subject matter; yet they are connected by the common theme, epitomized in the metaphor of dialogue, as a platform for active, productive communication, leading – on the pages of the book, if not elsewhere – to learning, and mutual understanding.

The Unveiled Ladies of Istanbul (Stamboul)

Authors: Demetra Vaka Brown, Yiorgos Kalogeras
Categories: History
The Unveiled Ladies of Istanbul (Stamboul) is a picturesque description of women's life in post-World War I Turkey during a period of social and political turmoil. Here Demetra Vaka (1877-1946), an expatriate of Ottoman Turkey, established American journalist and acquaintance of Prince Sabaheddin, returns to her native Istanbul after a 20-year absence. Describing women's lives in post-World War I Turkey, she reports on the successful project of female emancipation pursued by Mustafa Kemal as part of the nationalist agenda. Noting how much this project had benefited upper- and middle-class Turkish women, Vaka nonetheless regrets that the gradual emergence of the monocultural, modern Republic was bringing an end to the multiethnic character of the Ottoman State.
Language: en
Pages: 260 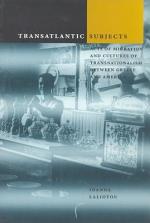 Authors: Ioanna Laliotou
Categories: History
The early twentieth century was marked by massive migration of southern Europeans to the United States. Transatlantic Subjects views this diaspora through the lens of Greek migrant life to reveal the emergence of transnational forms of subjectivity. According to Ioanna Laliotou, cultural institutions and practices played an important role in the formation of migrant subjectivities. Reconstructing the cultural history of migration, her book points out the relationship between subjectivity formation and cultural practices and performances, such as publishing, reading, acting, storytelling, consuming, imitating, parading, and traveling. Transatlantic Subjects then locates the development of these practices within key sites and institutions of cultural formation, such as migrant and fraternal associations, educational institutions, state agencies and nongovernmental organizations, mental institutions, coffee shops, the church, steamship companies, banks, migration services, and chambers of commerce. Ultimately, Laliotou explores the complex and situational entanglements of migrancy, cultural nationalism, and the politics of self. Reading against the grain of hegemonic narratives of cultural and migration histories, she reveals how migrancy produced distinctive forms of sociality during the first half of the twentieth century. 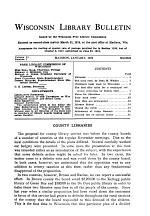 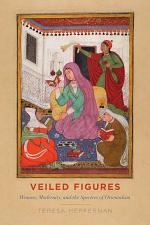 Authors: Teresa Heffernan
Categories: Literary Criticism
Islam, the Enlightenment, and the veil -- The great whore of Babylon: cosmopolitanism and racialized nationalism -- Two western women venture east: Lady Annie Brassey and Anna Bowman Dodd -- The Great War and its aftermath: militarized citizens, (un)veiled bodies, and the nation -- The burqa and the bikini: veiling and unveiling at the turn of the twenty-first century 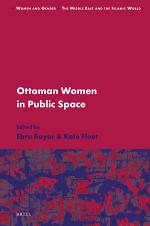 Authors: Teresa Heffernan
Categories: Social Science
Examining women as economic and political actors, prostitutes, flirts and slaves, Ottoman Women in Public Space argues that women were active participants in the public space, visible, present and an essential element in the everyday, public life of the empire.